Emma Samms is one of the UK's most famous exports. Her role as Fallon Carrington in Dynasty made her a global star. She has also starred in the legendary American series General Hospital as well as British soap Doctors. We managed to talk to Emma about her acting accomplishments as well as her charity work.

CBS: At what age did you decide that you wanted to be an actress?

Emma Sams: At the age of 17, after I had already had to give up a career as a ballet dancer due to injury.

CBS: Your first movie was Arabian Adventure which starred Hollywood legends Mickey Rooney and Christopher Lee, that must have been a daunting experience?

Emma Sams: It was, but it would have been more daunting if I'd been older and less naive.

CBS: How did you end up working in America?

Emma Sams: I knew that I wanted to work more in film and television than theatre and as they make so much more of that kind of product in the U.S. it seemed the place to be.

CBS: You soon became a regular on American TV starring in such dramas as Goliath Awaits and the classic, General Hospital. How did you cope with the workload such dramas present?

Emma Sams: At first it was very difficult to memorise so many pages of dialogue each day, but like a muscle gets stronger the more you use it, I found that my memory improved vastly over the years.

CBS: Did you have to audition for the part of Fallon Carrington?

Emma Sams: I was spotted - believe it or not - by Tori Spelling (Aaron's daughter), who was a fan of General Hospital and she recommended to her father that he check me out.

CBS: What was it like on the Dynasty set?

Emma Sams: It was both fun and hard work.

CBS: It must have brought a lot of media attention into your private life, how did you cope?

Emma Sams: It was a steep learning curve, but luckily I'd eased into it with my General Hospital job.

CBS: How did you feel when Dynasty came to an end? Was it a worrying time, meaning did you fear you had become typecast at all?

Emma Sams: I've always been recognised in America just as much for my role in General Hospital as for my role in Dynasty and they were very different characters so luckily I was in no danger of being typecast.

CBS: You've had a prolific career since Dynasty ended starring in many movies covering most genres. Do you have a favourite movie that you've made?

Emma Sams: Since I rarely watch the films that I've made I can only judge them on what my experience was like making them. In that regard, I'd have to say that my favourites are 'Delirious' with John Candy and 'Pretend You Don’t See Her' which I filmed in Canada with the most extraordinarily wonderful film crew.

CBS: Talking of movies, Treacherous Beauties has just been released onto DVD. Tippi Hedren co-starred with you, what was it like working alongside her?

Emma Sams: She was delightful. I felt very privileged to be working with her.

CBS: Catherine Oxneburg also stars, did two chat about your times on Dynasty?

Emma Sams: Most definitely! It was quite fun to be in a different environment but still have so much (and so many people!) to talk about.

CBS: Treacherous Beauties is based on a Mills & Boon novel, are you a romantic person, if so what's the most romantic thing you’ve done?

Emma Sams: I have my moments of being romantic, I suppose, but to me, romance isn’t about grand gestures, it's about consistency and listening to your partner.

CBS: Could you tell us about your charity work? 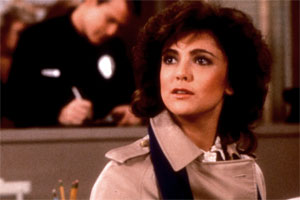 Emma Sams: I co-founded The Starlight Childrens Foundation many years ago, before I was even working on Dynasty. The charity grants wishes to critically, chronically and terminally ill children and provides entertainment to children when they are in hospital. The reason I started the charity is because when I was 9 years old my 8 year old brother Jamie died of a blood disease. As I was only 9 there was very little I could do to help but through Starlight I can help other families going through what I know to be a devastating and difficult time.

CBS: What projects are you working on at the moment?

Emma Sams: I am off to the US in a couple of weeks to co-host a Telethon for another charity, Variety. They help children with all kinds of different needs around the world and this will be my 23rd year hosting the telethon. I also have been successfully selling pen and ink drawings and am currently trying to amass enough of them to have an exhibition. Mostly, I look after my two children, Cameron and Bea.

Treacherous Beauties and 11 other Mills & Boon DVDs are out now in shops from www.networkdvd.co.uk and Emma can be seen in Dynasty currently showing on CBS Drama.